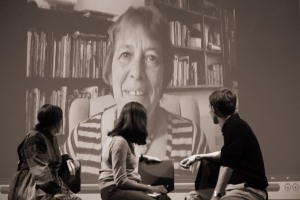 The winner of this year’s Little Rebels Award is Gillian Cross for her novel, After Tomorrow (OUP). Little Rebels Judge, Wendy Cooling, described the winning book as  “a frighteningly believable story”.  In her acceptance speech, Gillian said she was “over the moon…honoured and delighted”. Speaking about After Tomorrow, she said, “we don’t write tracts; we don’t write propaganda when we write fiction, but we can’t help writing things which engage with who we are and how we live in the world”.

The Little Rebels Award was presented by Wendy Cooling  to Alesha Bonser, Oxford University Press, on Gillian’s behalf at the London Radical Bookfair on Saturday, May 10th 2014.  Earlier in the day, Wendy chaired a panel in which some of the Little Rebels shortlisted authors, Geraldine McCaughrean, Gill Lewis and Deborah Chancellor, discussed their work. Asked for their response to being nominated for the award, the authors replied:

To hear more about how rebellious each of the shortlisted authors consider themselves, do see Playing by the Book’s wonderful blog, ‘Rebellious Reading & Other Audacious Acts’. 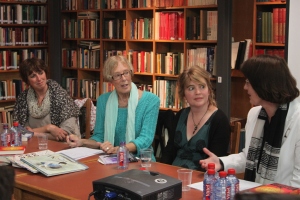 This year Letterbox Library (the award administrators) brought an additional Little Rebels panel to the fair. This panel addressed the question, ‘Where Are All The Little Rebels?’ Ann Lazim (CLPE and IBBY UK) chaired; contributing were: Professor Kim Reynolds and authors Alan Gibbons & Catherine Johnson. The big rebels delivered a very lively, accessible and popular debate. We ran out of seating very early on and the audience in many ways directed the form the discussion took. We only wish we’d filmed or recorded it. A summary is impossible, but early on the panel did concur that radical children’s fiction could be defined as fiction which offered an alternative way of living:

We (Letterbox Library) were delighted to run the Little Rebels Award on behalf of the Alliance of Radical Booksellers for a 2nd time. The new venue of Bishopsgate Institute was superb. The attendance at the bookfair was bursting. The adult Bread & Roses Award provided, as ever, a shortlist which gives you faith in the future of radical publishing and thought. And the experience of running the Little Rebels Award, as always, gives us all faith in a future generation of progressive thinkers and advocates of social justice.

For an excellent writeup on the history of the Alliance of Radical Booksellers, the bookfair and the awards, see Ross Bradshaw’s blog, ‘ London Radical Bookfair: past, present & future.

THE LONDON RADICAL BOOKFAIR IS RETURNING ON 9TH MAY 2015!

One thought on “The 2014 Winning Little Rebel Is…”

Next on the 2021 #LittleRebelsAward shortlist - Agent Asha: Mission Shark Bytes!
Shortlisted for #LittleRebelsAward 2021, The Soup Movement by @bendavis_86 ,a middle grade novel published by @oxfordchildrens 🥳
Good morning ☀️
Next up in our 2021 shortlist - THE GOODY by @laurenchildthatsme , a picture book published by @hachettekids 🥳
Loading Comments...
Comment
×
%d bloggers like this: