We were so very sad to hear about the recent death of Wendy Cooling. Wendy Cooling was one of only two guest judges for the Little Rebels Award in its inaugural year, 2013. As such, her wit, enthusiasm and wonderfully unchecked views informed the award’s inception and development.

We felt extremely honoured that Wendy accepted the invitation to join the Little Rebels team. She was and will remain something of a Looming Tower in the children’s literature world: the founder of Bookstart; winner of the prestigious Eleanor Farjeon Award (2006); recipient of an MBE for Services to Children’s Literature (2009); a children’s author; a teacher of 20 years… We were nervous making our request and felt she might easily reject us if, for no other reason, than a simple lack of time. But with the spontaneity and energy which defined her, Wendy replied immediately, “How exciting! I would love to be a guest judge.” She stayed on for 5 years, not just judging but also chairing panels at the associated London Radical Bookfair (the first was on ‘Progressive Children’s Fiction) making the award presentations and introducing the shortlist to attendees at the fair- we have especially fond memories of her projecting her voice cheerily over and above the heads of a large crowd who’d joined the fair after a few beers in the sunshine outdoors. She had an absolute gift for welcoming and coaxing personal anecdotes and writing nuggets from each of the award shortlistees; the panels she chaired were never staid industry affairs; there was always, always, laughter. She usually finished off the plate of brownies in judges’ meetings . And expected more the next year.

Would Wendy have described herself as ‘radical’? Perhaps not but we suspect she would have rather liked others calling her that. She was certainly political. She believed fervently not just in quality children’s literature but in all children having access to it; she was in the institution of the children’s book world but she wasn’t by any means institutionalised by it; Wendy nudged, provoked and teased; she was unafraid of other’s options and unafraid of expressing her own; she certainly enjoyed being associated with what she would have called an “edgy”, non-trad children’s book award, one with a clear message of social justice. We will miss her breadth of experience, her guidance, her clarity and her heel-kicking sprightliness. 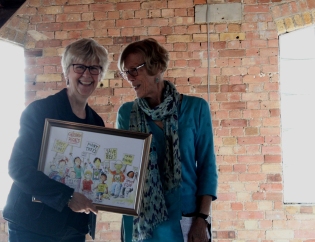 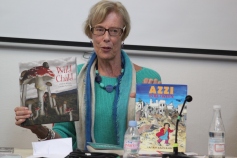 chairing a panel in 2013, the award’s first year 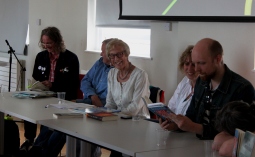 at the 2016 shortlist panel