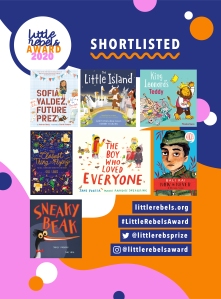 On behalf of the Alliance of Radical Booksellers, we are thrilled to reveal the seven books shortlisted for the 2020 Little Rebels Award!

The Little Rebels Award celebrates children’s fiction which challenges stereotypes, promotes social justice and advocates for a more peaceful and fairer world. The titles on this year’s shortlist explore community empowerment, wastefulness and sustainability, consumerism, racism and untaught histories, domestic violence and the asylum and immigration system, the varied expressions of love, and why it’s better to build bridges than borders.

Gill Lewis is shortlisted for the fifth time in the award’s eight year history for The Closest Thing to Flying, and Andrea Beaty and David Roberts make the list for a second time with Sofia Valdez, Future Prez.

Fen Coles, Co-Director of Letterbox Library, said of the shortlist: “The current pandemic has sharpened so many social justice issues- poverty, domestic violence, the destruction of our environment- but also shone a light on our capacity for great kindness. The latest Little Rebels Award shortlist similarly exposes the fissures in our society alongside an overall optimism and a belief in change. Never has this roll call of social justice books been more useful in giving children tools to make sense of the world and to know that they can be the agents of change.”

The Little Rebels 2020 shortlist in full:

THE CLOSEST THING TO FLYING by Gill Lewis (OUP)

THE BOY WHO LOVED EVERYONE by Jane Porter, illustrated by Maisie Paradise Shearring (Walker)

THE LITTLE ISLAND by Smriti Prasadam-Halls, illustrated by Robert Starling

NOW OR NEVER – A DUNKIRK STORY by Bali Rai (Scholastic)

You can order all of the Little Rebels 2020 shortlisted titles as a book pack from Letterbox Library, or individually from Housmans Bookshop

Little Rebels Award winner BOY, EVERYWHERE in the window at radical booksellers @housmans_books 🥰⚡️ @a.m.dassu @oldbarnbooks
#Repost Posted @withregram • @rapclassroom
CONGRATULATIONS to A.M.Dassu, whose novel BOY, EVERYWHERE has been crowned the winner of the Little Rebels Award 2021!
Ahead of tonight’s ceremony here’s some more of our judges’ thoughts on the 2021 shortlisted books 😍😍
Loading Comments...
%d bloggers like this: